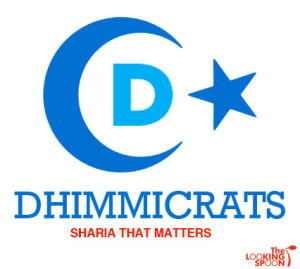 Support of religion from the far Left has never been big, I get that.  What I don’t get, is now that we are all aware of the current war on Christians and Jews, the Left sides with Muslim extremists, who live, die, and murder for THEIR RELIGION!

Christians and Jews will not push you from your homes, torture you, behead your children, bury you alive, and rape your wives, simply due to your opposing beliefs.
Don’t allow your hatred of Christians and Jews to blind you to the militant extreme religious army that is spreading like a cancer in our world and threatening your freedom and security.  The Left should choose their bedfellows a bit more wisely.  Ignoring the Muslim assault against humanity today, only assures the massacre of all of us tomorrow; not just the “Bible Thumpers”.

Know the DNC.  Sharia is the real war on women and humanity : http://www.norcalblogs.com/gate/2012/09/01/dnc-promoted-radical-islamic-brotherhood-rally-prayer-during-democrat-convention