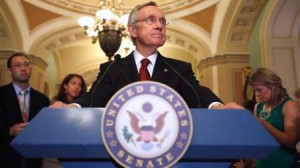 CONGRESS = The DEMOCRAT run SENATE and The REPUBLICAN run HOUSE OF REPRESENATATIVES.

So to date there are 200+ Bills that the REPUBLICAN run House has passed and sent to the DEMOCRAT run Senate.  The next step should be that the Senate puts up each bill for a vote and the country’s work gets done.  Not so for the last six years, due to the Senate Majority Leader, Mr. Harry Reid.  He is sitting on all of the work the House has done and will not allow any of these bills to go forward in the Democrat run Senate.

Now which party is responsible for the “Do Nothing Congress”?  You tell me.