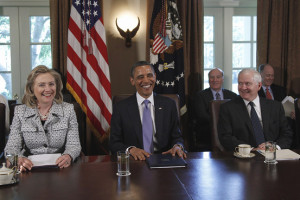 Robert Gates needs to be supported by Republicans for his right to write a book insulting Obama while he is in office.  Bush was condemned by Carter and Clinton while he was in office so why are Democrats acting as if Obama should be off limits.  Liberals will always attack a sitting Republican president; therefore do not let the media force you into acting as if it is inappropriate when the same happens to a Democrat.

Republicans, if you are going to be in politics, learn to play the game like the Liberals do.  The “moral high ground” will only get us so far when our opponents have none.  http://blogs.wsj.com/washwire/2014/01/07/top-10-revelations-from-robert-gatess-memoir/